The Development of the Unit Block of Rhode Island Avenue

The land upon which the unit block of Rhode Island Avenue was constructed on beginning in 1902 was known originally as the "Moore and Barbours Addition" to the city of Washington. Located just beyond the border of the city, which ended with Pierre L'Enfant's Boundary Street (Florida Ave), the area was eventually developed adjacent to the suburban neighborhood of Le Droit Park, and just west of a suburban area known as Eckington.

An 1887 map of the area, illustrated at left, shows the extension of Rhode Island Avenue as a proposed avenue through what was then agricultural and rural lands. At the time, the Soldier's Home was established to the north along with Glenwood Cemetery, Le Droit Park to the west, and Lincoln Road to the east, beyond which was the settlement of Eckington. Beyond a railroad track belonging to the Baltimore and Ohio Railroad was the "Institution for the Deaf and Dumb," which became Galludet University, illustrated at right in an early image from the era.

The first building activity along the unit block of Rhode Island took place in 1902, when the Central Methodist Protestant Church obtained a permit to build its sanctuary at the corner of Rhode Island and 1st Street on April 8, 1902. It was the only structure on the block until S. H. Meyers applied for and obtained a building permit for the eleven homes located between 49 and 69 Rhode Island Avenue on January 17, 1903.

The three homes located at 33 to 37 Rhode Island Avenue were built following a building permit issued to owner Alex Miller on January 2, 1906. Dr. H. Young obtained a permit to construct a large stable behind his home at 65 Rhode Island Avenue on April 19, 1906. A Hopkins map dated between 1906 and 1908, illustrated below, shows the block only partially developed at the time.

The six homes built between 21 and 31 Rhode Island were constructed following issuance of a permit to Jas Marten on July 29, 1908. Later that year, on August 7th, a building permit was issued for the three homes located between 11 and 15 Rhode Island Avenue. The eleven unit 'Henry Lee' apartment house at the pointed corner of Rhode Island and North Capitol Street obtained its building permit on November 6, 1909. The twelve unit "Rhode Island" apartment building at 1929 1st Street was constructed in 1925. 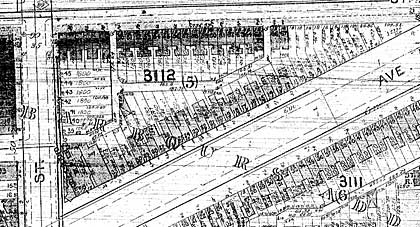 Information provided by Kelsey & Associates.
Kelsey & Associates have been researching and compiling history of individual townhomes and small buildings in Washington since 1995. They specialize in individual "house history" that reveals when your house was built, who built it, who lived there, and what they did. Through maps, vintage photographs, and other sources such as the census and tax assessments, a complete chronological history of any house in Washington can be completed that offers tremendous details about the building and those that once played a part in its history. For more information, visit: WashingtonHistory.com.