A Brief History of Bloomingdale 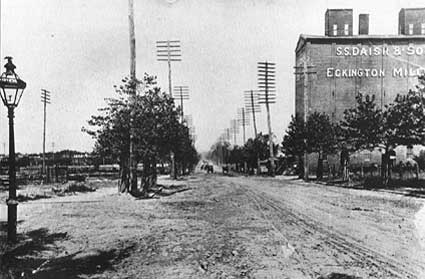 Despite being located just outside the original boundary of the City of Washington as designed by Maj. Pierre L'Enfant in 1792, the area referred to today as the Bloomingdale neighborhood had its residential development origins over a century later. Located just east of LeDroit Park, one of Washington's earliest suburban developments when it was opened in 1877, the lands that comprise the residential blocks of Bloomingdale at that time were utilized for a variety of light industrial uses. Boundary Street, today Florida Avenue, was the dividing line between paved, planned streets laid out in the original city plan, and the country, where a variety of landowners maintained orchards, large country estates, and a mixture of commercial properties. In this area, a small community of Eckington emerged as a result of an intersection of two rural roads about the time that a much more planned and protected LeDroit Park was conceived in the late 1870s.

One of the first uses for the area, however, was for train yards and transportation routes into and out of the city of Washington. In 1889, Silas Daish established a large flour mill at the corner of 3rd and Florida Avenue, seen in the photograph above. It was one of only two flour mills in the city at the time, the other one being located nearby on Delaware Avenue, N.E. The lack of paved streets and the intrusion of massive telephone poles were among the sources of complaints from Eckington residents, many of whom felt the promises of idyllic residential living had been dashed by the intrusion of industrial activity.

The rural nature of this area changed, however, before the turn of the twentieth century as the rest of Washington neighborhoods began to experience the pressures of growth stemming from the huge influx of workers and freed men for decades following the Civil War. Developers and land speculators began to chart the former industrial and orchard lands for proposed development, including the area between the village of Eckington and LeDroit Park. Roads corresponding to the grid system of Washington's streets were improved, curbed, and paved, in order to introduce extensions of the popular trolley lines, opening the area to residential development in the late 1890s.

Churches often led the way, and in 1902, the Rhode Island Avenue Methodist Episcopal Church built their elegant structure at the desirable corner of Rhode Island and 1st Street, N.W. In a post card dated 1907, illustrated above and to the left, the church was headed by Reverend J. M. Gill, pictured on the card.

Samuel Gompers, the founder of the American Federation of Labor in 1886, built a house for himself at 2122 1st Street, N.W., in 1900. Born in London, England on January 26, 1850 to poor Jewish immigrants from Holland, Gompers began working as a shoemaker at the age of 10. He soon switched trades to become a cigar maker, which brought him to New York City (with his family) in 1863. He Headed the AFL-CIO until his death on December 13, 1924. His house was declared an individual landmark on the National Register of Historic Places in 1974.

Eleven homes along the unit block of Rhode Island Avenue joined the M. E. church just a year later, in 1903, and the remainder of the surrounding blocks had been built in a speculative nature by such developers as Harry Wardman and S. H. Meyers within the following decade.

Home construction often necessitated school construction, with the Gage School in the 2000 block of 2nd Street being erected in 1904. Utilized for decades before school consolidation, the 21,000 square foot facility is scheduled to be converted to a senior citizen apartment complex.

Leftover from the earlier industrial use of the area to the north is the city's McMillian Park sand filtration site and McMillian Reservoir, bounded by North Capitol Street, Channing Street, First Street, and Michigan Avenue, N.W. The area is part of a chain of public green spaces established in Senator James McMillan's 1901 plan for beautifying Washington. Apparently, the original grounds of the site were designed by landscape architect Federick Law Olmsted, Jr. The Army Corps added the McMillan Park Reservoir and the Washington City Tunnel (10 meters in diameter and 4 miles long) between 1882 and 1902. In 1905, a slow-sand water-filtration method was added at the McMillan Reservoir, and additional improvements were continually made. Following the death of Senator McMillan in 1902, the grounds of the site were renamed McMillan Park. The site was designated a historic landmark by the DC Historic Preservation Review Board in 1991.